[Study] The Deadliest Stretches of Road In Pennsylvania 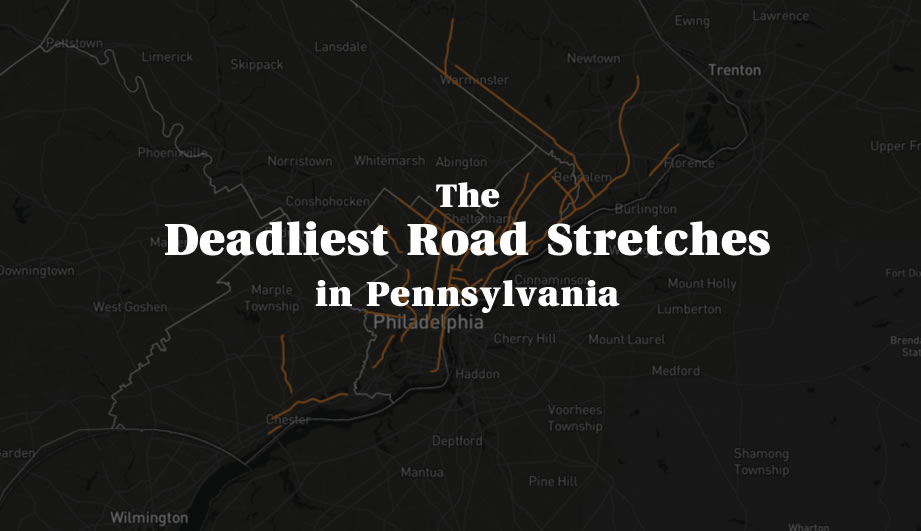 At Dallas W. Hartman P.C., Attorneys at Law, our Pittsburgh personal injury attorneys wanted to find out where exactly these fatal crashes were occurring, and if there were any stretches of road where they occurred more frequently.

With the help of data visualization firm 1Point21 Interactive, we analyzed three years of data from the National Highway Traffic Safety Administration’s Fatality Analysis Reporting System (FARS) to map out sections of road in Pennsylvania with the highest amount of fatal crashes.

We used data from 2015-2017 to find roads and highways with 4 or more fatal crashes within close proximity and mapped them out accordingly.

In all, we found 82 total segments across the state with at least 4 fatal crashes in those three years, accounting for 465 crashes and 513 total fatalities.

*Zoom in and hover over each section of road to reveal more information.  If viewing on a mobile device, rotate device for best experience.

The Deadliest Road is in Philadelphia

According to our data, the deadliest stretch of road in Pennsylvania is a section of Roosevelt Boulevard, centralized in the Rhawnhurst neighborhood of Philadelphia. Spanning nearly 11 miles, this segment of Roosevelt Blvd had more fatal crashes (26), deaths (30), and alcohol-involved fatalities (7) than any other road that we identified in our study. 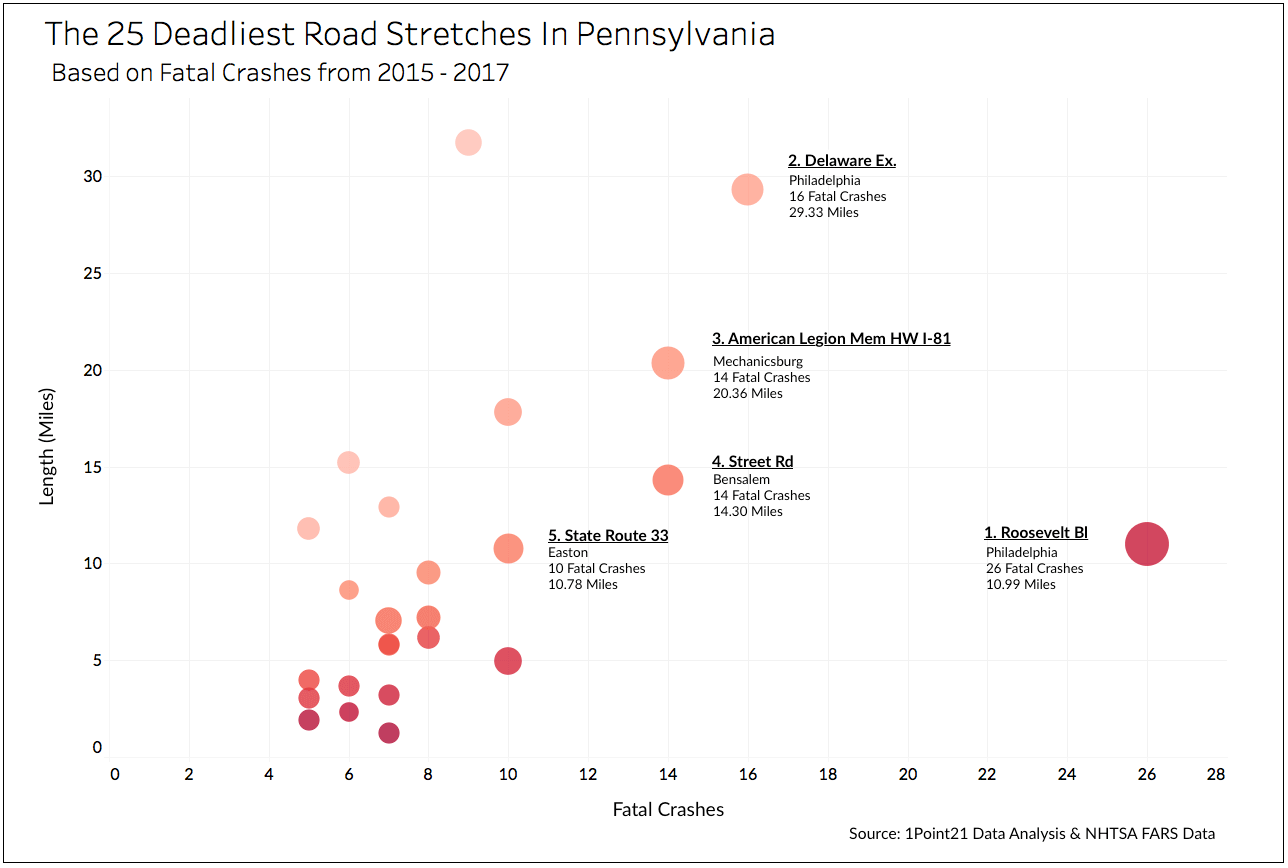 Passing through Pennypack Park and the Northeast Philadelphia Airport, this stretch averaged about 38,000 vehicles daily in 2016 – a high amount of traffic, but not exceedingly high, compared to other highways and arterials in the state. Why so many deadly motor vehicle crashes occur on this particular stretch of road is something that should certainly be investigated further.

Philadelphia Had the Highest Number of Deadly Roads

The city of Philadelphia, in general, dominated this list, with 24 deadly segments of road – more than a quarter of our list. Altogether, these segments combined for 155 total fatal collisions, leading to 167 deaths – nearly a third of all deaths in our analysis. Aside from the top ranking segment, other deadly Philadelphia roads include:

Please Note: It might be logical to conclude that the highest accidents numbers would occur in the highest populated areas, like Philadelphia. And this is true in some cases. But in this study, we factored in the road lengths as well in our ranking system. Some of the featured areas might surprise you!

Harrisburg had the next highest amount of dangerous road segments. Despite having a population roughly 30 times less than that of Philadelphia, the state capital was the location of 5 deadly segments, totaling 22 fatal crashes leading to 23 fatalities.

Interestingly, the two deadliest segments in Harrisburg run almost parallel to each other within close vicinity of the Harrisburg Mall. Each accounted for 5 crashes leading to 5 deaths – one being a 2.3-mile stretch of I-83, the other being a 3-mile segment of Paxton Street south of the highway.

Pittsburgh Had Two Dangerous Segments – Both in the Top 20

Although Pittsburgh, Pennsylvania’s second-most populous city, had only two segments in our analysis, they were among the most dangerous in our list.

The deadliest segment in Pittsburgh is a vast stretch of Ohio River Blvd that spans nearly 18 miles, from the Conway borough all the way to Bellevue. This segment ranked seventh overall on our list, accounting for 10 fatal crashes, leading to 12 deaths. For perspective, even though Philadelphia had more deadly segments, only three of them ranked higher than this stretch in Pittsburgh.

The other deadly segment is a 3.7-mile portion of I-376 that spans roughly from the Liberty Bridge to Schenley Park, accounting for 6 collisions leading to 7 fatalities. This is a notable segment that runs through the Pittsburgh Technology Center, the rapidly developing hub for all things high-tech in the city. With more than 1,000 people working at the 48-acre site, a correlation may exist between the location and the high number of collisions.

Other notable deadly segments of road found in smaller cities within the state:

To identify deadly stretches, we used GIS software and applied 2.5-mile buffer around each crash.  Crashes with overlapping buffers where grouped into segments that ran until the encountered a section with no other crashes.

*Related Study* – For more Pennsylvania data and safety information, view our recent study about the Deadliest Intersections in Allegheny County.

We can communicate with all new & current clients without meeting face to face. Call our office, chat with an intake specialist on our website, or send us an email. Contact us now. Close